FWB: Mindless Sex Film or Friendship With Some Sex In It? 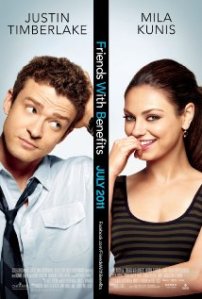 As many of you know Friends With Benefits, or FWB as the trailers are using, released this weekend alongside Captain America.  My first speculation about the movie was that it would be exactly like No Strings Attached, which launched only five months ago, with the substitution of Mila Kunis for Natalie Portman and Justin Timberlake for Ashton Kutcher.  It turns out my suspicions were pretty dead on about this movie.  However there were a few things about this movie that surprised me and, in my opinion, made the movie better than I was expecting.  So sit back, relax, and read my review about another summer chick flick.

In case you haven’t seen a trailer for this movie, FWB is about Jamie (Mila Kunis) and Dylan (Justin Timberlake) two people who succeed in the business world but fail in the dating world.  Jamie, who is a job headhunter, recruits Dylan for art director of GQ magazine and brings him to New York to work.  Once there the two get acquainted, make jokes, and eventually become friends.  However friendship apparently is not fulfilling all of their needs, mainly sexual, which leads to the two having casual sex without an emotional attachment.  Once the pact is set, the movie becomes a portrayal of their friendship with glimpses into the past of the protagonists.

As I watched this movie, the first thing that came to mind was how similar the acting, plot, and comedy was to No Strings Attached.  Kunis plays a role that can be described as an older version of Jackie, her character form That 70’s show.  One may even think that Kunis’ character is a raunchier version of Portman’s character from NSA, with a much filthier mouth.  However, this role seems to be natural to her, as she played the part well not overacting at all.  I’m happy to say that I was also pleased with Timberlake’s acting, which was much better than what I saw in Bad Teacher.  Timberlake nails the part of a big business worker again, like he did in The Social Network, and captures the lifestyle down to the slightest detail.  His diversity as well was impressive as there were times where he was incredibly silly and other times more down to earth and serious, which made for a stronger character, perhaps my favorite of the film.  The other actors in the movie do a good job as well, but unfortunately are only in minor supporting roles often providing comedic one liners or situational comedic relief.  Woody Harrelson was pure comedic relief as he played the gay sports columnist.  Patricia Clarkson was also comedic relief, as she brilliantly played the obscene Lorna whose antics perhaps made me laugh the most.  Jenna Elfman was perhaps the only other character that had a balance of comedy and serious roles.  She was definitely one of the factors driving the plot of the story and her character was an essential bridge that connected everyone in the story.  Elfman fit that part naturally and I was greatly impressed with how flawless her acting was in the part.

So I’ve already shared one positive quality of this movie with you, which is how well the characters fit together in this movie.  Every character had their role to play, and each character had the appropriate amount of screen time to fulfill their roles.  The pace of the movie was also pretty decent for me as well, a little dragged out in places, but for the most part quick to keep my attention.  I also liked that they spread the background of the characters throughout the whole movie, filling in the pieces of the characters gradually instead of at once, which kept me into the movie.  Yet another quality I liked was how the movie really captured and portrayed aspects of what true friendships looks like, minus the sex of course.  There were plenty of scenes that actually made me think of my friendship with my best friend as Jamie and Dylan shared secrets, debated on issues, hung out casually while watching movies, or played video games together and that was nice to see.  This friendship was a driving force of the movie and opened up various situations that gave the movie some spice.   Perhaps the last biggest positive for quality for me was how this movie made fun of other romantic comedies that currently fill the movie world.  The way this movie focused on how cheesy romance scenes can be some time had me laughing in tears, and how the fantasy romance is not how the real thing goes.  I applaud this movie for poking fun at these various romance film characteristics.

Despite the plethora of positive qualities in this film, there were a few qualities of the movie that I really didn’t like.  Perhaps the biggest fault to this movie is how predictable the movie was.  Before thirty minutes of the movie had passed I was able to figure out about three quarters of the movie and knew what was going to happen at the end.  About halfway through the movie had about 99% of it.  I don’t understand why chick flicks cannot surprise me at all, but I guess that’s because the audience for these movies doesn’t care about surprises, just romance and comedy.  The next weakness for me was the graphicness the sex scenes for these movies.  I’ll admit I’m uncomfortable with these scenes in every scenario, but this movie really took it over the top for me.  Kunis and Timberlake cover a wide variety of things one can do during sex.  Some people laughed, others remained silent, and some like me were shocked to see some of the shots.  A third weakness was how some of the comedy grew stale in the movie.  Although I found a large amount of the comedy funny there were some jokes that just went on and on, and after the fifth or sixth reiteration was just not funny anymore.  One of these jokes was about who sang Closing Time, it was funny the first three times, but annoying after that.

Okay time to wrap up here my friends, though I could definitely write on for a few more pages.  The truth is Friends With Benefits is a raunchier, more detailed, and overall better version of No Strings Attached.  The main strength of this movie is how well the cast fits together and the various levels of connection between each character.  The diverse comedy, natural acting style, and detailed character development were also extraordinary qualities that helped paint a nice picture of how friendship can be one of the greatest gifts in life.  However the large amount of predictability, the constant integration of sex, and stale comedic jokes really weakened the movie for me as a whole.  Thus I’ll give Friends With Benefits a 7.0-7.5 for my overall score, and will say it is one of the better romantic comedies I’ve seen in a while.  It’s worth a Netflix folks, but probably not worth the trip to the theatre, unless you’re looking for a good date movie or girls night out film.  So tune in next time boys and girls for my Robbie’s Next review and don’t’ forget to spread to the word to your friends.  Later.

Posted in Chick Flicks, Comedy and Craziness. Leave a Comment »