Man of Classy Wit and Realism, but Not so much Action 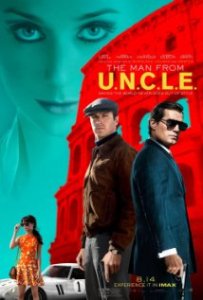 Hollywood is really big on making mountains of money from molehills of ideas. This weekend, that molehill is a sixties television series about a spy group bent on stopping global terrorism from occurring. My movie review today is the Man from U.N.C.L.E, a movie that has been greatly endorsed in the premovie showings at my local theater. So with all the hype, and the potential for another good spy movie, I have once again gone back to my home away from home to bring you another review. Let’s get started!

When it come to spy movies one never knows what directions they will take. Will it be a comedic one where spies bumble around like idiots? Is it going to be action packed and filled with guns and bombs? Or maybe a very technical movie filled with high specks and stealth? For this movie the answer was a blend of action and comedy, and in a way that wasn’t overly cheesy. The Man from U.N.C.L.E takes you back into the world of old fashion spy films where our leading spies were sent to uncover by use of deceit and stealth. The whole film is laced with numerous sequences of our team sneaking around highly guarded facilities, using simplistic tools to quietly get to their goals. This isn’t some James Bond or Mission Impossible moment where overdramatic music blares in your ears as guns blaze and explosions rattle the walls. Instead it’s got more cleverness behind it, involving coordination between the two countries as they put aside their differences and played to their strengths. It took a more “realistic” approach, where adaptation, observation and a silver tongue go farther than any pistol can.

While I do appreciate the cleverness, the action sequences the cast promised were somewhat lacking. An opening chase scene was rather bland and a little overdone, but did have some impressive moves that an elite spy would have. Past that there are a few chase scenes, and a couple of quick shoot em up moments that took on an interesting, and somewhat dizzying, camera perspective. Without those adrenaline rushing moments, I can’t lie that I was a bit bored at all the stealthy maneuvering. The lack of a unique plot also didn’t help move things along and at times the movie dragged for me as they dodged around the goal. Some plot “twists” help liven things up and help give a little unknown to the film, but it still didn’t do much to bring excitement to the film.

What makes up for the action though is the witty comedy this film carries. Instead of crude vulgarity or stupid one-liners that will surely make memes, this film chose to let the situation bring the funny. Many times I chuckled as the spies blunders led to some other fools misfortune, a dark twist often following that was quite humorous. Our two spies hardly reacting to the situation further made the comedy better, their moot expressions syncing with the simplistic dialog. The banter was fun too, as the rivalry between the two male leads had them acting like fighting siblings, with the lady spy acting the role of the mature mother. Eventually this trick got old school, but there were some real comedic genius moments.

Putting the comedic aspect aside, the biggest strengths of this movie are the setting and the acting of the film. Our design team did a fantastic job bringing the feelings of the 60s, and the classic series, back to life in high definition glory. The outfits are the backbone of the look, the various skirts, cardigans, and thick blazers really popping out amidst the retro scenery. Bringing the classic cars into the picture only further amplified the blast to the past, especially the old radios and tunes that blared through the speakers and further capture the energy of the ages. The soundtrack of the picture is really fun as well, and the symphony score further ups the dramatic edge that gives a little flair to the mix. All of it blends well together, and helps take the nostalgic flair up a notch!

Acting wise the movie is solid as well. Henry Cavill takes the generic spy caveat and runs with it, making himself sound like a pompous twit. He uses that debonair and cockiness to speak his silver tongue and accomplish his goals, while fighting the emotional turmoil set on him. Armie Hammer going the Russian path was actually not as bad as I imagined him to be, and he captures the accent decently to sell his role. Hammer’s done a 180 and added a creepy edge to his portfolio with quiet intensity and an insanity complex that makes him dangerous on multiple levels. However, his downfall is the temper tantrum moments and dramatic shaking of his hands when his anger comes to full boil. I think the director may have gotten a little to into a comic book character if you know what I mean. Alicia Vikander does a nice job with her role as well, managing to cover a broad spectrum of characters and play all of them fairly strong. Not to mention she looks cute in all her retro outfits and pumps. Together the three of them make a good team together, and have a natural chemistry to their teamwork that could make for some interesting sequels.

The Man from U.N.C.L.E is not the most exciting spy movie I have seen, but it certainly has class and realism to it. Sure it could have used some action kick to it, and I would have liked a little more originality to it. Overall though, it’s not a bad movie and I think it would be a good rent movie in the long run. I still recommend Mission Impossible 5 over this one, but fans of the series should give it a shot.

« Not So Fantastic Four, A Messy, Ridiculous, Bore
Another “Party Movie Of The Year” Wannabe »
%d bloggers like this: