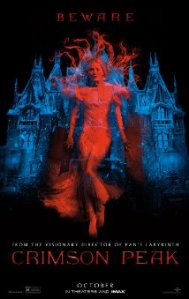 In the season of horror specials, I look for special gyms among the mediocre Halloween specials of today. So naturally I turn to the theater to provide me with the scare, creeps, and thrills to put me in the spooky mood. One movie that has shown promise is Crimson Peak, directed by Guillermo del Toro, the supposed master of horror. His work has provided such thrills in the past, but is the Peak capable of pushing one over the edge into a realm of nightmares and screams. As always read on to find out.

With del Toro you never know what you are going to get, but in this film his direction seems to be story. Crimson Peak is certainly plot favored, actually focusing on the characters instead of just the scares. From the beginning we jump into Edith’s (Mia Wasikowska) story, getting a look into her life and her relationships with our colorful cast. After a rather slow, detailed opening, there is a little ambiguity that lures you in to the second act. Once at the house, the true mystery begins, as you try to decipher the nuances of the obvious plot. I knew the general details, but piecing the motives, the drive, and deeper details was the real challenge in this movie. The few twists in the tale were decent, if disgusting, but this was a solid tale for a genre that is often lacking in the story department.

In the acting department, del Toro’s casting director did her homework incredibly well. Wasikowska performed very similar to her work in Alice, very primp, proper, and elegant without the awkward curiosity. I felt her responses to the CGI ghosts were kept in check and blended well with the more grounded moments of the film. Tom Hiddleston plays his old hat as the eclectic debonair blinded by ambitions and driven with a dark intensity to sting. He delivers his lines with poise, amplifying them with the right emotional edge to drive the dialogue home. Charlie Hunnam looks handsome (according to a few female audience members), and his acting isn’t too shabby, though he takes a backburner to the rest of the cast. The best acting title of the movie though goes to Jessica Chastain who is like a chameleon changing tones, emotions, and parts at the drop of a hat. Chastain executes her part fantastically, capturing the dark environment and personifying it in her acting.

By now I’m sure you’re saying, “Cut the crap, I want to know if it was scary!” For this reviewer, Crimson Peak was not as scary as the trailers had made it to be. The scares are largely based on the surprising, jump out at you moments, but are so predictable (or obvious) that they lose their surprising sheen. In addition, the direction the film takes also dulls the edge of the scares, almost as if there is no threat to be had. The real “scare” factor is the design of the ghosts themselves. Rotten, decaying bodies drenched in crimson red and wraith black certainly establish a lovely picture. Their disjointed movements are also quite disturbing, the unnatural angles, the bone crunching and unholy screams mixing to form creatures that nightmares are made of. However, the house itself may play a big factor in upping the scare. A Victorian mansion filled with creaking floors, spacious halls, and dim lighting is a rather realistic stage to haunt. In fact, the creepiest aspect may be the manipulation of those shadows, to hide the visage of the dangers and steal the comfort of home away. Once more Del Toro allows your imagination to do the heavy lifting for making you squirm in your seat.

Crimson Peak is one of the better horror stories, filled with mystery and character development. While not the scariest movies, the setting and use of shadows is a great tool to scare audiences. Del Toro just needed a little more honing and a slight change in plot to give you the scares that most of us wanted. Though there was a lack of screaming, it was a lot better than half of the mundane sequels and thrillers that come to the theater. I can’t recommend this one for the theater, unless you are looking for a decent horror plot, so save this for watching home to maximize scares.

My scores for Crimson Peak are: