A Rough Night For This Reviewer 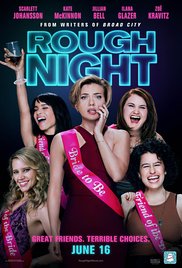 Bachelorette parties, a sacred ritual to help a young woman transition from single life into the world of marriage.  Of course, like most things, modern traditions have adulterated with new traditions and rituals that leads for a rather “exciting” night. So why not make another movie about it.  Tonight, my friend and I hit the theater to cover the latest comedy to “grace” the big screen entitled Rough Night!  What does this obviously titled film have in store for us?  As always, please read on to find out and help determine whether or not it is worth your money to hit the theater.

So what do you get?  For once the trailers were pretty spot on with their portrayal of this movie.  Rough night is a very raunchy, simplistic, and over the top comedy that has little sustenance outside of the attempt at humor.  It’s ridiculousness at times is clever, but these moments are few and far between, buried under the comedy rubble that fills this movie. Aggressive innuendos come rushing out of the woodwork, many delivered in the overdramatic manner that somehow seems to be popular and entertaining to many.  The all-star cast assembled to for this film are okay, dropping their dynamic acting range for superficial roles filled with cursing and satire. Lazy writing also doesn’t help sell the comedy factor, primary thanks to the consistent cursing, shouting of the male genitalia, overzealous drug use, and cringe worthy catchphrases.   Kate Mickinnon is able to salvage some parts of the film with her usual tricks, working the Australian accent with her pizazz and spot-on timing.

Story wise, nothing special here.  Rough Night’s plot is about 80% revealed in the trailers and there is little surprise left for you in the audience. Some of the more adult moments will be the eye widening magic you are seeking, but again these are often awkward uncomfortable, or unnecessary.  Still the movie’s tale had some surprising character development and a nice twist thrown into the mix to help keep things dynamic.  The morals hit close to home on some level, but again are robbed by another bout of stupidity.  I know, you aren’t there for the character developments and rugged plot, but other comedies have learned to balance things and that is where this movie fails.

In the end though here are my likes and dislikes:

It’s nice to see a movie fit the expectations set by the advertising, but it’s sad that this is a form of entertainment.  Rough night fails to find balance and resorts to cheap parlor tricks known as adult humor.  Sure there are clever components (primarily thanks to the boyfriend and Kate), but even they can’t save the movie from the monotonous laziness that is to come.  kWhy must it be overacted?  I don’t know, but nevertheless this movie failed on many accounts.  Recommended audience members include bachelorettes, girls nights out, or fans of one of the cast.  For the rest though, skip this movie until it darkens the library of Netflix.