Guns, Horses, And Unbalanced Screen Time: Welcome Back To The Wild West! 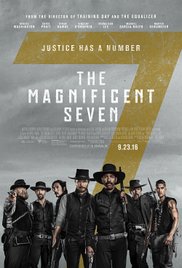 It’s been a while since we had a western movie, and even longer since we had a good one. This weekend hopes to break this drought, by releasing the remake to the 1960s classic the Magnificent Seven.  Does the Wild West fit into to the modern day expectations, or will the archaic times of the past fall on blind eyes?  As always, I’m here to report on the latest films to hit theaters and give you the scoop.

One important aspect to any Western is who you cast as the gunslingers.  In this installment, the casting director gets major props for the team assembled. Denzel Washington is the perfect lead, as his attitude and bravado are choice qualities for someone a rebellion leader. Chris Pratt balances his teams martyr attitudes by providing his comedic delivery and energy helping to relieve the tension of the movie.  The rest of the squad play their roles perfectly and brings a unique quality to the team to develop a unique posse.

While the cast is a great start, it is only one part to the Western formula.  It requires setting, simplistic goals, open frontier, lots of extras in limited clothing, and a villain you most likely will hate.  Magnificent Seven brings all these aspects in splendid detail, with a modern day design many want in the 21st century. This movie will pull you back in the days of the frontier adventure of classic Westerns from riding horses through the desert wastelands to the gun slinging battles the era was famous for, you know before the hero settles into the saloon for a drink. This film is representative of the nostalgic genre Hollywood capitalized on decades ago and is devoid of extraterrestrial twists (Cowboys and Aliens) or weird mechanical spiders (Wild Wild West) to taint the well water.

Yet the greatest component for me was the action of this movie. Magnificent Seven delivers the promised Western action, with massive bullet slinging battles unfolding for nearly half of the movie. One will certainly get an adrenaline rush as the two sides let their guns talk in high definition special effects at break neck speeds.  Our heroes use their wits and diverse skills to keep the battle dynamic, all while poor extras convulse to imaginary bullets “hitting” their bodies. The ending sequence alone kep me on the edge of my seat and provided an emotionally sitmulating climax that we hope for in these movies.  Yes, it is the typical, blockbuster popcorn tactics most films are famous for, but it works so well in this film.

As I mentioned, Magnificent Seven certainly has villains representing the genre, but sadly they still didn’t shine in this film. The land baron Bogue has all the stereotypical  qualities of a baron including an insatiable greed and ruthless mechanisms to obtain his desires, but he still is quite unimpressive in other departments. Yes, I get that’s the point of most Western villains, but usually they have a set of lieutenants to enforce their roles. In this film, many of the antagonists  were not that impressive and many of their “victories” were cheap, conventionally written ploys to maximize their money.  In addition, the hyped up fights sometimes are drawn to a hasty, unchoreographed conclusion that left me disappointed. Oh well, at least the uncredited extras were capable of a good shot or two.

Another limitation for me was the rushed backstories of most of the characters. Magnificent Seven’s cast has some complicated histories, and we get a decent look at the skeletons that dwell in their closets.  There could have been more though to it though, not only to develop them more, but give some of the band more screen time. The quick overcoming of their personal fears or the convenient brotherhood formed was a little bit of a stretch for me. Fortunately they had the action to distract you from this limitation and keep the pace moving.

Finally, the biggest dislike was the unbalanced use of the seven.  I know, the top billed are destined to get the most screen time so directors get their money’s worth. Denzel, Pratt, and Hawke lead the cavalry, complete with detailed backstory, impressive set of skills, and a majority of the lines. Our other cavalcade have their moments as well, including meme worthy one liners, impressive moves, and unique costumes to seal their place.  Yet there were times where they were severely underutilized, reduced to quite mumblings or a fleeting dive into the the building. This is mainly true for the Warrior (Martin Sensmeier) and the Outlaw (Manuel Garcia-Rulfo) who although have some fitting moments, are off camera for much of the film and almost thought to be dropped out of the film at random times.

If you want a Western, Magnificent Seven is certainly your best shot.  This production will immerse you into the world of cowboys and well more cowboys, with engaging characters for you to grip to. However, the action is the selling point of this movie and provides the exciting edge that has been lacking for much of this month.  Yes, I would have liked a little more character balance and better villains, but overall I really enjoyed this movie.  I certainly recommend this movie for a theater visit to a wide variety of audience members, but be warned this is a darker version of the tale you love.  And darkness leads to violence that may be a bit too much for some younger audiences.